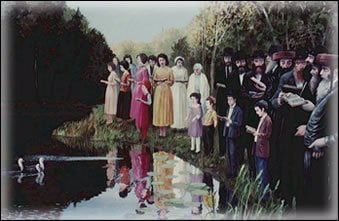 Tashlich comes from the Hebrew word meaning “to cast,” referring to the intent to cast away our sins via this meaningful and ancient Jewish custom common to both Ashkenazi and Sephardic communities.

Special verses are recited next to a body of water, such as a sea, river, stream, lake or pond, preferably one that has fish (though when no such body of water was available, some rabbis were known to do Tashlich next to a well, even one that dried up, or next to a bucket of water). Upon concluding the verses, the corners of one’s clothes are shaken out; for males, this is usually done with the corners of the tallit katan (tzitzit garment).

Though Tashlich is not mentioned in the Talmud, its earliest reference appears to be in the book of the Prophet Nehemiah (8:1) which states, “All the Jews gathered as one in the street that is in front of the gate of water.” This gathering is known to have taken place on Rosh Hashanah.

Many reasons are given for this custom:

While there are different versions and verses of the Tashlich liturgy depending upon community, what are common to all are the verses from the book of Micah (7:18-19) “Who is a G‑d like You…” These words correspond to G‑d’s thirteen attributes of mercy which we seek to arouse on Rosh Hashanah as we are being judged; the allusion to these thirteen attributes is known to always be beneficial.

The goal of Tashlich is to cast both our sins and the Heavenly prosecutor (a.k.a. the Satan) into the Heavenly sea. And when we shake our clothes after the Tashlich prayer, this is a tangible act to achieve the spiritual goal of shaking sins from our soul.

Needless to say, the physical motions near the water and fish of Tashlich are not what grant us atonement. But if we pay attention to the symbolism and apply the sincere desire to heal our relationship with G‑d as portrayed in the physical demonstrations of Tashlich, then it serves as a crucial part in the process of repenting and returning to G‑d in purity.

May we all shake ourselves from sin and be signed and sealed in the Book of Life for a good and sweet new year!

No products in the cart.